Linear models might be useful to several aims such as comparing two or more groups, controlling for potential confoundings, or assessing the heterogeneity of the findings by means of meta-regressions.

To calculate a linear model you need to specify the model (up to four variables to use) and the hypothesis. You can also specify a filter for subgroup analyses.

To calculate a linear model

Select [Linear Model] in the Statistics menu, to open the following dialog: 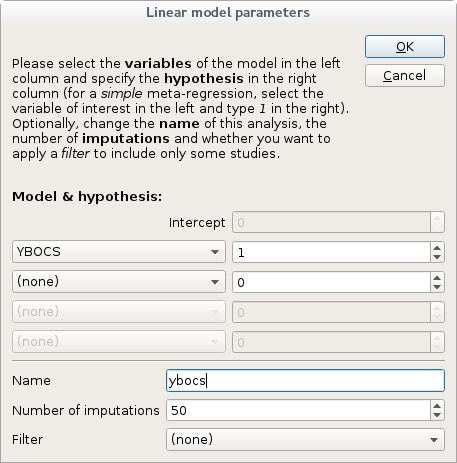 The MLE step of the linear model calculation, which can take long in large meta-analyses, can be run in parallel using concurrent threads. Note: is not advisable to use more concurrent threads than the available in your pc. You can learn the number of available threads in your pc at the 'multithreading' tab of the preferences windows.

Note: In order to modify the number of concurrent threads while using the command-line, you need to modify by hand the value of nthreads in the file sdmpsi_params.xml, that is created after the preprocessin